A bit of context - I do some investing in equities on the side and I’ve always wanted to build a simple stock ticker in the form of a CLI app that runs in my terminal setup. There were a few out there but none that would show just the information I needed, in a minimalistic fashion. And I thought it would be a fun project for me since I don’t have much prior experience building a CLI app.

So last weekend, I decided to build one for fun! Here is the quick image of it running and you can find the code over at https://github.com/aranair/rtscli. 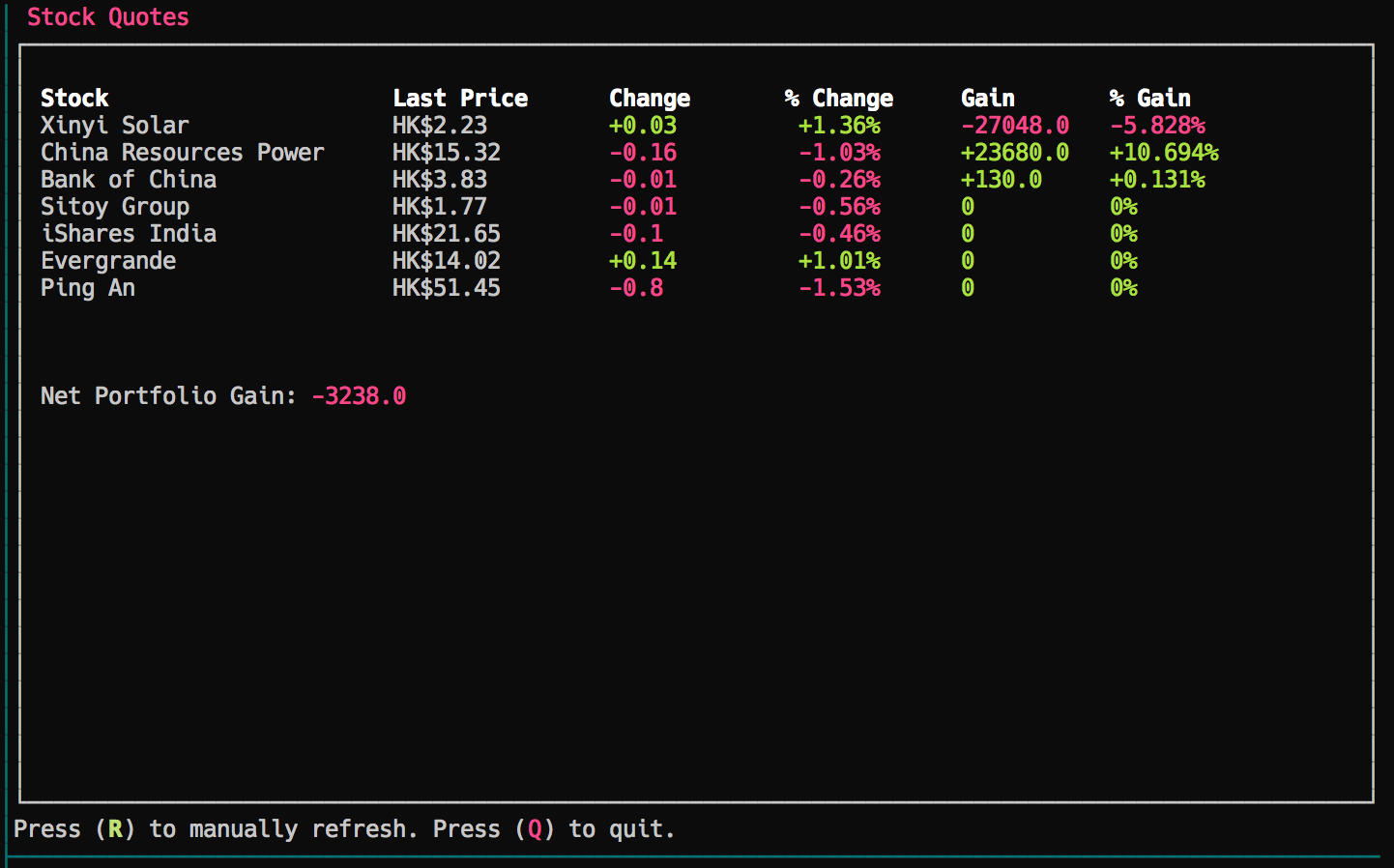 I’ve been starting to work with Python recently - due to the data-related work at Pocketmath. So language-wise, Python was a natural choice. But honestly, many other languages offer packages that can achieve the same result or more - like the ccurses library in C.

But for Python, I found a number of different libraries for CLIs:

Eventually I went with urwid because it seems easier to just jump in and get started with it instantly. Urwid is an alternative to the curses library in Python and it implements sort of like a layer ontop of boilerplate stuff that turns out to be really productive for me.

Okay, this section is mainly describing some of the functionalities I wanted and strictly speaking, has nothing to do with urwid nor python nor code so feel free to skip if you’re not into this ;)

The basic functionalities I wanted was:

I imagined the app to be a long-running CLI that continuously accepts commands, while at the same time pulling the stock information at an interval, on top of re-painting the information on screen. That can be modelled with a loop - a MainLoop as urwid calls it.

I think of it as a controller of sorts.

set_alarm_in is like setTimeout in the JavaScript world; it just calls the refresh method instantly in this case. In the refresh method I set another alarm that goes off in 10s, that is as good as telling it to do one data pull from Google Finance every 10 seconds.

It calls the get_update() method that spits out an array of tuples of (color_scheme, text). I’ll skip the details of the method but it is basically just calling a REST api that replies with JSON and parsing the response into a long string for display.

This method kind of interrupts the event loop every 10 seconds.

I also define a color scheme that can be used throughout the app.

In other parts of the app where text is displayed, those keys can be used to tell the app what color / background the text span should be rendered in.

This is just like a color palette of a site

This creates a header and assigns the titlebar key color scheme to it.

Same for quote_text, except this time a bunch of other widgets were used.

A Filler widget will maximise itself to the screen and the Padding one is self-explanatory; it sets padding in terms of columns. And finally the LineBox leaves a border around the components nested in it. Finally, the Frame ties it all up into a layout for my app and it is used in the initialization of the MainLoop.

There are a ton of other ways you can structure the main components of the app and there are so many widgets implemented in the library like the container widgets - where you have Piles(stacking vertically) or ListBox (for menus) for example.

I didn’t really need much user interaction so that made things alot easier; the only interaction was basically just 2 keys: R - which forces a refresh of the data and Q - which exits the program.

Note: The method has to accept the 2 keys. That’s the contract of the main_loop.set_alarm_in()

Preparing the Package for Pypi

I added a setup.py, this is sort of like the gemspec of ruby gems where metadata and dependencies are stated. I didn’t use any folders because the script is so short already.

Of course, you do have to setup a pypi account and have the credentials in the .pypirc file. After that, all that was left was:

That’s it; All ready for pip install rtscli!

There are a bunch of improvements I can think of, but for a start:

If you have any suggestions, feel free to let me know below!